Ukraine’s President Volodymyr Zelensky has strongly reacted to the attacks on different regions using the Zaporizhia nuclear power plant. He once again called for strict sanctions against Moscow. Reuters news.

Zelensky has accused the Russian forces of using the Zaporizhia nuclear power plant in Ukraine to attack the surrounding areas.

In a video message published on Monday (August 15), he said that Moscow is trying to control Kiev by seizing Ukraine’s nuclear facilities.

Zelensky said it would be a shame for the world if the Zaporizhia nuclear power plant could not be protected. If Russia’s actions bring disaster, even those who remain silent today will not be immune to its effects. Negotiations will require new and tougher sanctions on a terrorist state like Russia and its nuclear industry.

The local mayor claimed that the Russian forces launched another missile attack on Kharkiv in the morning of the same day. Bombs fired by Russian troops landed in a children’s playground. Residential buildings,

churches are damaged immediately if the fire breaks out. One person was killed and six injured. 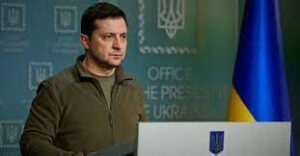 Meanwhile, New Zealand has sent 120 of its military personnel to the UK to train Ukrainian troops in the fight against Russia. Canada and the Netherlands have also sent their troops. More than 1,000 Ukrainian soldiers are being trained in weapons handling, battlefield first aid, and more in at least four locations in the UK.

On the other hand, President Vladimir Putin has said that Moscow is ready to provide modern weapons to allies at any time. He said that Moscow’s allies in Latin America, Asia and Africa are very important for Russia.

However, analysts say that Putin is talking about supplying arms to boost the arms trade.