A mosque submerged in water from Phulwaria Dam in India’s Bihar state’s Nawada district has emerged after three decades. A submerged mosque in Rajouli Chiraila village has become visible as the water at the southern end of the canal adjacent to Phulwaria Dam has dried up. The news was reported by Pakistan’s Express Tribune in a report.

According to that report, a mosque that sank three decades ago due to Phulwaria dam in Nawada district of Bihar state, India, has woken up due to drought. The mosque was found in Chiraila village of Rajauli block after the water dried up at the southern end of the dam reservoir.

According to locals, after the construction of Phulwaria Dam in 1985, the mosque known as ‘Noori Mosque’ slowly sank under the water. 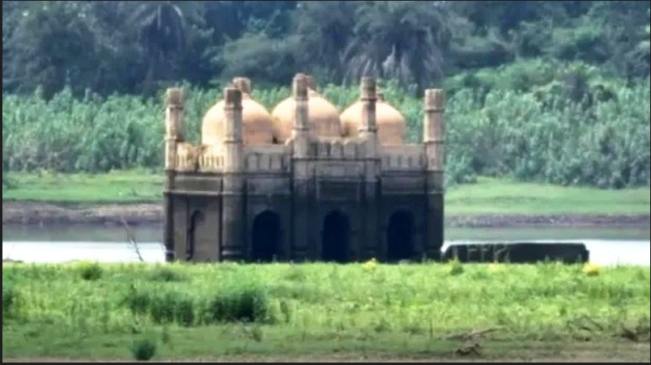 The height of the mosque from the ground to the upper dome is about 30 feet. The age of the mosque has been debated since it came up.

Many say the mosque was built in the early 20th century and may be around 120 years old. However, looking at the architecture of the dome of the mosque, it can be concluded that it was built during the post-Mughal period.