Joe Biden brought up the murder of Saudi journalist Jamal Khashoggi in a meeting with Prince Salman. In response to this, the Saudi prince said that the United States is also wrong.

In a statement about the meeting between the top two leaders of the two countries, the Saudi authorities said that during the meeting,

Prince Salman told Biden that Saudi Arabia had worked to prevent mistakes like the murder of journalist Jamal Khashoggi. Punished those responsible.

He said, like the Iraq war, the United States has made some mistakes. In addition, the Saudi prince also raised the issue of the murder of journalist Shireen Abu Akleh and Abu Gharib, who imprisoned in Iraq. 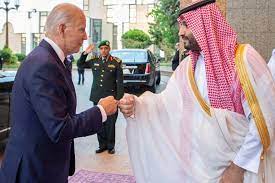 Biden told reporters Friday after the meeting that he told Prince Mohammed that Prince Salman was responsible for the 2018 killing of Washington Post journalist Khashoggi at the Saudi consulate in Istanbul.

“As I always do, I have made it clear that the issue of human rights is very important to me and to the United States,” Biden said. He further said,

“Having raised the issue of Khashoggi’s murder in the meeting, I have clarified what I thought about it then and what I think now”.

Earlier, various controversies  created around President Joe Biden’s visit to Saudi Arabia. He had to face various questions before the meeting with Prince Mohammed bin Salman in Jeddah on Friday.

The US president’s visit to Saudi Arabia expected to come amid Washington’s efforts to restore ties with Riyadh and to address the energy crisis caused  the Ukraine-Russia war.

Saudi Arabia is one of the world’s oil producing countries.

Besides, analysts believe that Biden’s visit is to improve Israel’s relationship with Saudi Arabia and reduce Iran’s dominance in the Middle East.🔱