The first ship loaded with grain left for Lebanon from Odesa port in Ukraine. The Ministry of Defense of Turkey reported this information on Monday. News from AFP.

“The Razoni ship left the port of Odessa and headed for Tripoli, Lebanon.” It  scheduled to arrive in Istanbul on August 2. After testing in Istanbul, its journey will continue.

According to Ukraine’s Minister of Infrastructure Oleksandr Kubrakov, the ship is carrying 26,000 tons of corn.

More grain ships will leave Ukrainian ports in the future under the July 22 grain deal. The Rajoni ship  built in 1996. 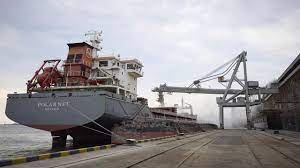 Its length is 186 meters and width is 25 meters. The capacity of this ship operating under the flag of Sierra Leone is 30 thousand tons.

About one-third of the world’s wheat exports come from Russia and Ukraine. However, due to the Russia-Ukraine war, the grain supply to the Black Sea cut off,

The agreement ensures safe passage for ships departing from the ports of Chernomorsk, Odessa and Pivdenny and for ships arriving there from other ports.

Meanwhile, Turkey officially launched a special joint cooperation center in Istanbul last Wednesday to supervise export activities under the agreement. Military-civilian officials from the two warring countries and Turkey and the United Nations  stationed at the center.

Their primary task is to monitor whether Ukrainian grain ships are getting safe passage and whether they are carrying prohibited weapons.

According to United Nations estimates, nearly 50 million people around the world are suffering from ‘acute food insecurity’ due to the war.🔱