Elon Musk, one of the world’s top billionaires and CEO of Tesla, has once again caused a storm. Said that he is going to buy the English giant football club Manchester United. News Reuters.

In one tweet, he said, ‘I welcome Manchester United.’

The Manchester United club is currently under the control of the American Glazer family. They bought the club in 2005 for £790 million ($955.51 million). As of Tuesday, Manchester United’s market value was $2.08 billion.

Manchester United is one of the most popular football clubs in the world. They have been champions of England a record 20 times and won the European Cup. However, the Glazer family have come under fire from fans recently after their 4-0 defeat to bottom side Brentford in the Premier League. 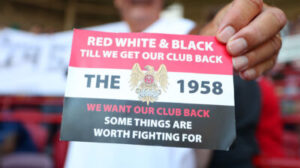 Many people have made various comments in the comments. If they keep playing like before, you get a discount,” one tweeted. Another wrote, United players are finally going to be dangerous in space!

Many have pointed to the contract dispute over Elon Musk’s Twitter. Earlier this year, Musk offered to buy Twitter, the largest social media platform. Musk pulled out of the deal, citing that the Twitter authorities did not comply with the terms before the huge deal was made. Now the matter is to be settled in court. The two sides will face off in Delaware Chancery Court on October 17. The hearing will continue there for five days.