After Burdwan in West Bengal, now Howrah. The mysterious death of 6 people from Ghusuri of Malipanchghara thana area of ​​Howrah after drinking alcohol.

Apart from this, many others have fallen ill. The area has become heated around this incident. Local residents ransacked the shop from which the victims bought liquor.

According to Indian media news daily, Pratap Karmakar has been selling alcohol for many days in the Ghusuri area of ​​Malipanchghara police station in Howrah.

In the evening, the workers of the area gather there. Even on Tuesday (July 19) there was no interruption.

Locals claim that several people fell ill after consuming alcohol in that shop in the evening. Their condition deteriorates with time. 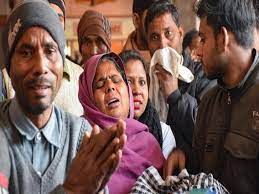 Meanwhile, the number of sick people increased one after another. The sick were taken to the hospital at night. 6 people died early on Wednesday (July 20).

As a result, alcohol is believed to be the cause of this incident. But the matter is still not certain. An investigation has been initiated.

The liquor shop has already been sealed by the police. Liquor seller Pratap Karmakar has also been arrested.🔱