After a medical emergency at the President’s office for about three hours, Putin’s condition improved slightly. Later the doctors left there.

This information reported in a report by the British media The Independent on Wednesday, citing Russia’s mysterious Telegram channel “General SVR”.

At around 1 o’clock that day, the medical personnel on duty at Putin’s residence urgently summoned to the office of the president.

According to the channel, Putin told doctors that he was suffering from severe nausea. After 20 minutes, an additional team of doctors urgently summoned in addition to the doctors present in the office of the President.

Doctors treated Putin and were there for about three hours. They later left Putin’s chamber when the president’s health improved. 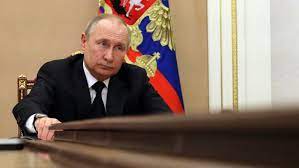 In the past, Telegram channel General SVR claimed that Putin’s alternative could  presented using deepfake technology in the future, the Independent reported.

Since the start of Russia’s invasion of Ukraine in February, rumors have spread that Putin is suffering from cancer or Parkinson’s disease.

A few days ago, the Russian investigative media The Project reported that Russian leader Vladimir Putin has visited a cancer doctor at least 35 times in the past few years.

He so obsessed with his health that he resorted to unconventional and primitive therapies.

The media claimed that Putin bathed in blood collected from deer antlers when they were soft and blood clot-like, hoping to cure cancer.

In the Altai region of Russia, near the border of Kazakhstan and Mongolia, there is a superstition of bathing in the blood of deer antlers in hopes of getting rid of disease.

Last June, The Project revealed the identity of a Russian cancer specialist to whom Vladimir Putin has secretly visited dozens of times over the past four years from his Sochi gateway home.

It said, “People with medical knowledge believe Putin has been undergoing a complex procedure related to some form of thyroid disease throughout.”

The 70-year-old Putin has recently appeared gaunt and unusually indifferent in public and in meetings with key government officials.

He  later rumored to be suffering from cancer and other serious illnesses, including Parkinson’s.

Vladimir Putin has been in power in Russia for more than 20 years. He ordered to send Russian troops to Ukraine on February 24 this year.

Since then, Russian soldiers have been fighting in Ukraine. The Ukraine-Russia war has caused widespread unrest, economic and food crises around the world.🔱