Kylian Mbappe and Neymar are out of PSG’s pre-season friendly. But Messi was in the team. Argentinian Mauro Icardi, Leandro Paredes, Spanish footballer Sergio Ramos played with him.

In the warm-up match, PSG faced France’s second-tier league US Quéville. Messi played the first 45 minutes of this match.

However, Sergio Ramos won PSG from the penalty spot in front of him. Zeidi Gassama scored the second goal for the team. In the end, PSG left the field with a 2-0 victory. 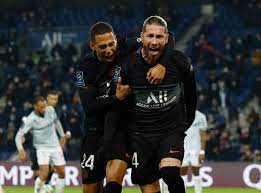 It was important for him to start the match with a win. Galtieri has been brought into the team after the Argentine coach Mauricio Pochettino.

PSG got a penalty in the 33rd minute of the match. Sergio Ramos came to take the penalty. Messi took the penalty;

But as Ramos came forward to take the penalty, Messi looked a bit annoyed. However, Ramos put the penalty kick right into Quivili’s net.

Galtier fielded a completely different XI at the start of the second half.

Shortly after the start of the second half, Zeidi Gassama scored in the 54th minute. In the end, PSG left the field with a 2-0 victory.🔱