Elderly parents are walking in the streets with begging dishes to get rid of the body of their son lying in the government hospital.

It  alleged that an employee of the hospital demanded Rs 50,000 for handing over the body. But they do not have so much money. So the helpless parents have chosen the path of begging to raise that money.

Such a heartbreaking incident took place in Samastipur in the Indian state of Bihar.

their son’s body out of a government hospital has recently gone viral on social media.

“My son had gone missing a few days ago,” Mahesh Tagore told ANI. 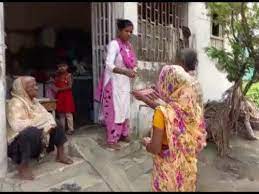 Later I  informed by phone that my son’s body was in Samastipur Sadar Hospital. A hospital worker demanded Rs 50,000 to pay for his son’s body.

We are poor people.

How can we pay that much? ‘

It  learned that most of the employees of the hospital are working on contract basis. They do not get paee on time.

Earlier, the hospital staff  accused of taking money from the patient’s family members.

The hospital authorities have said that strict action will  taken in the recent incident. Samastipur Civil Surgeon said.

SK Chowdhury said, ‘Those responsible for this incident will not  spared. It’s a shame for humanity.🔱