All the rest of the team left the team, but two of them stayed with the team for so long. One of them said goodbye to the club. Leicester City goalkeeper Kasper Schmeichel has joined French league side Nice.

Many of them left the party one by one with time. Many new faces have arrived. But two names were burning like constant stars for so long.

Striker Jamie Vardy and goalkeeper Kasper Schmeichel; He has had the best time of his career for the Foxes.

Both clubs confirmed the 35-year-old’s departure on Wednesday (August 3). However, the terms of the Danish national team captain’s contract at the new club or the financial aspects of the transfer have not been disclosed.

However, according to the British media, Casper changed the club in exchange for a transfer fee of only 1 million pounds. 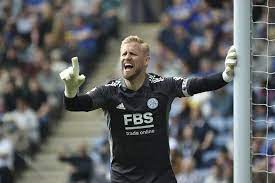 Kasper, son of legendary Manchester United goalkeeper Peter Smeikel, plays football for city rivals Manchester City. After crossing the youth team, he made his debut in the main team in 2006.

Then he joined Leeds United in 2010 after spending time on loan at several clubs. However, after one season, he tied the knot with Leicester City.

Then 11 years of continuous journey. Casper witnessed it all – Leicester’s rise from the Championship in the mist, winning the league under Claudio Ranieri in the 2015-16 season,

giving birth to one of the most thrilling fairytales in Premier League history.

He played 479 matches for the club in 11 seasons, which is the club’s third highest number of matches played.

The 35-year-old star could not hide his emotions as he left the much-memorable club. His passion and love for this club also showed in his tearful farewell message.

‘After 11 incredible seasons I have made the difficult decision to leave Leicester. To me it is more than just a club.

It is a place where I have made some lifelong friends, many memories have been born. It was like my home.’

After leaving Leicester, he shared photos of special moments at the club on Twitter. There are pictures of the club’s promotion to the Premier League in 2014,

the celebration of the Premier League title won two seasons later is a highlight of his career.

Kasper is also successful in the Denmark national team as his father’s successor. After making his debut for the national team in 2013, he played 84 matches.

Became the captain. He played in the 2018 World Cup and 2020 Euro in the national team jersey.🔱