The competition continues for England and Sweden. This Tuesday, the two teams play their place in the final. So, we tell you here at what time and on which channels to see the first England – Sweden semi-final of the Women’s Euro! 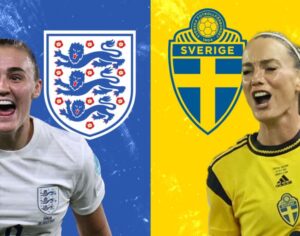 In the quarter-finals, England defeated an energetic team from Spain (2-1). The English were able to find the opportunities in a difficult and long meeting. Nevertheless, they proved during the group stages that they were capable of setting up a rich and precise tactical game. For its part, Sweden defeated Belgium (1-0) in added time. The match was complicated and the chances difficult to seize. Sweden and England will therefore face each other after having had an excellent competition and scored many goals. So, we tell you here at what time and on which channels to see the first England – Sweden semi-final of the Women’s Euro!

England – Sweden: at what time and on which TV channel?
The first semi-final of the Women’s Euro 2022, England against Sweden, will be broadcast this Tuesday July 26 live on the TF1 and CANAL + channels . The kick-off time of the match is scheduled for 9 p.m. Retransmission is free on TF1 but on CANAL+ you must have a subscription. The game will be broadcast live from Sheffield’s Bramall Lane Stadium. The match will be refereed by Esther Staubli.

Good summer plan for football fans: CANAL+ flash sale
CANAL+ is offering a surprise flash sale this summer. Find here the offer on the CANAL+ limited series with a small price for a few days. As a reminder, CANAL + broadcasts from September the best posters of the Champions League 2022/2023 and 100% of the European cups from the following year. Please note that the 100% CANAL+ offer is for a limited time, so you don’t have much time left to take advantage of it.