Basically the robot broke the child’s index finger, unnerved by the child’s quick response to the counter move. Chess is essentially a game of intelligence, mental skill and patience.

So till date no incidents of violence have  heard around the game of chess. However, if not in humans,

it has  disturbed in the case of machines and robots. This information was given by British newspaper Guardian in a report citing Russian media.

The Guardian reports that a seven-year-old boy’s finger  crushed an opponent’s robot during a chess match at the Moscow Open held in Russia last week.

Basically the robot broke the child’s index finger, unnerved by the child’s quick response to the counter move.

Regarding the incident, the president of the Moscow Chess Federation, Sergei Lazarev, told the Russian news agency Tass, “The robot broke the child’s finger.

The robot has naturally played many more matches before. But the incident is certainly spectacular.”

In a video of the July 19 incident published on the Baja Telegram channel, the robot   seen holding the child’s finger for a few seconds. Later, a woman and three men rushed and rescued the child.

“The robot was going to eat a ball from the child,” said Sergei Smagin, vice-president of the Russian Chess Federation. 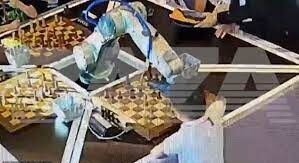 But before the robot finished making moves, the child started making its own moves. The child broke the rules.

In addition, Sergey Smagin claims that such an event is very rare. According to Bazar, the baby’s name is Christopher.

He is one of the top 30 chess players in Moscow in the Under-9 category. After the robot pinched the finger, everyone quickly tried to free the child. Christopher was able to be freed but suffered a fractured finger.

Sergey Lazarev said Christopher’s finger plastered. However, the incident did not affect the child. He played again the next day and finished the tournament.

However, Christopher’s parents have contacted the public prosecutor’s office to take legal action in the incident.

Russian Grandmaster Sergey Karjakin said, “This  never happened before. It’s just an accident. I wish the child a speedy recovery.”

According to a 2015 study, at least one person  killed  industrial robots each year in the United States alone.

According to the US Occupational Safety Administration, most occupational accidents involving robots since 2000 have been fatal.

In 1979, the first person died after  crushed  a one-ton robot arm at the Ford Company’s Michigan plant.